Pupils at Atlantic Academy Primary created a rainbow of positivity to light up Children in Need day. 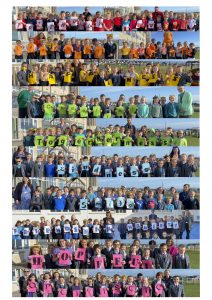 Their efforts, which saw them wear clothes in a rainbow colour of their choice and pose with their favourite happy word, didn’t just raise money for a good cause, they also helped to raise spirits in the community of Portland during the country’s second lockdown.

Melissa Heppell, Principal of Atlantic Primary, has experienced first-hand how powerful words can be. During the first lockdown earlier this year, pupils were asked to create positive messages for the community as part of a school project and Mrs Heppell said it was touching to see the messages on display in the windows of residents.

Mrs Heppell decided Children in Need was a good opportunity to resurrect the idea and combine it with raising money.

She said: ”Children in Need is an important tradition at Atlantic Academy. It gives the students the opportunity to raise money for children who are less fortunate and this year it has also been the chance to share a positive message with our community.

“We have 7 year groups and they each selected a colour of the rainbow and wore clothes in the shade chosen. They then chose a positive word that makes them feel happy and a voting process to choose the word so there was a sense of democracy.’’

The image will now be included in a leaflet drop in the area and also sent out to local businesses.

Images have also been posted around the all-through school. Some 350 pupils and teachers occupy the primary section of the academy. They all posed in their social bubbles with the images then pieced together to create a whole school photo.

Mrs Heppell said she was proud of their efforts which also saw a minimum donation of £350 made to Children in Need. She said: ‘’The photo opportunity was also a chance for the whole school to work together and for the pupils to know that other people in their year groups are there even if they can’t see them at the moment because of social bubbles.’

Children in Need is a BBC appeal that has now raised more than a £1 billion to support children and young people. Over the years, television viewers have been treated to an array of memorable highlights from Jeremy Vine in stockings to Fiona Bruce in fishnets and newsreaders singing Abba tunes.

Children In Need can actually trace its origins back to 1927. The radio appeal, billed as the BBC Christmas Fund for Children, aired on Christmas Day and lasted just five minutes, raising more than £1,300 for four children’s charities.

In 1951 it became known as Children In Need Of Help. But it wasn’t until 1980 that Children In Need became a full-scale television appeal. Presented by Sir Terry Wogan, Esther Rantzen and Sue Lawley, it raised more than £1 million.

Read all here in this lovely Dorset Echo article.
Back to all news

We are deeply saddened to learn of the death of Her Majesty Queen Elizabeth II. A source of continuity, strength and reassurance for 70 years,…

Atlantic Academy was inspected in January 2022. The full report will be available on the Ofsted Website soon. Please see our communications to Parents send…

Youngsters at a Portland school have completed their ‘degrees’ and passed with flying colours! A selection of bright primary and secondary students at Atlantic Academy…