Youngsters at a Portland school have completed their ‘degrees’ and passed with flying colours!

A selection of bright primary and secondary students at Atlantic Academy Portland have taken part in a Scholars Programme initiative created by the charity Brilliant Club.

It was the first time that primary students took part and only the second year in a row for those in secondary.

The all-through school had two stand out students who took part: Eva-May Rawles in Year 6 was the highest-ranked primary student with a score of 75 out of 100 for her essay which saw her awarded a 1st. 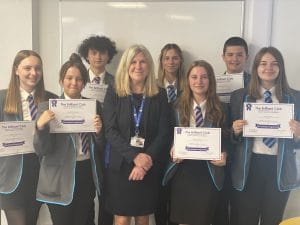 Chay Johnson, a Year 9 student was singled out for being the ‘absolute star pupil of the whole school’ by the PhD tutor who marked his dissertation and gave him 76 out of 100 for his dissertation which also saw him awarded a 1st.

The aim of The Brilliant Club is to raise the aspirations of children in state schools and encourage more to consider applying to prestigious or highly selective universities such as those classed as Russell Group.

The Scholars Programme sees pupils aged 8 to 18 work with a PhD researcher to experience university-style learning structured around seven tutorials. They then have to complete a challenging final assignment which is marked and moderated using university grades.

Dr Tracy Hayes was assigned to Atlantic Academy by the Brilliant Club. Describing her experience with the school she said: ‘’It was a pure pleasure to teach the students, both KS2 and KS4. I loved every minute of it. I truly hope they also found it a positive experience. The looks on the faces of the Y6s as I gave them their grades and feedback was absolutely wonderful.

“Chay – the absolute star pupil of the whole school – was quite literally blown away with his score! Things like this make it all worth its weight in gold.’’

A total of nine students in Year 6 from Atlantic Primary took part and were tasked with writing a piece of fiction no longer than 500 words. They also had to explain the origins of their work including why they chose the characters they had and which authors had influenced them.

Four primary students were awarded First Class Honours with the remaining being awarded a 2:1 or 2:2.

Melissa Heppell, Principal of Atlantic Primary, told the Dorset Echo: ‘’I am incredibly proud of my students. They have worked exceptionally hard and this project was completed on top of their daily school work and has involved lots of commitment and hard work on their part. It has been a challenge for them.

“The students were part of a nationwide cohort with children across the country taking part and they have put Portland on the map thanks to their great results.

“The Scholars Programme is a fantastic initiative to be involved in as it encourages our students to aspire to better their lives through education which is wonderful.’’

Atlantic Secondary saw eight pupils take part in total from Year 9 and Year 10. They were tasked with researching and writing a 2,500 dissertation on the Victorians.

Three were awarded First Class Honours, including Chay, with the remaining scoring a 2:1 or 2:2.

Chay said “I thoroughly enjoyed the course and I feel it has helped prepare me for the future. I am really pleased with my final result.”

His mum Jessica added: ‘‘We are extremely proud of Chay for taking part and for his excellent results. We feel this has given him a confidence boost for a future university course.’’

Tasha Board, Careers Lead at Atlantic Secondary, said: “We’re a small island and an initiative like this is about raising the aspirations of our students and allowing them to experience what university life might be like and to consider it as a viable option for them.

‘’I’m incredibly proud of the efforts of the students who took part.’’

Back to all news

We are deeply saddened to learn of the death of Her Majesty Queen Elizabeth II. A source of continuity, strength and reassurance for 70 years,…

Atlantic Academy was inspected in January 2022. The full report will be available on the Ofsted Website soon. Please see our communications to Parents send…

‘They have achieved fantastic results & that is down to their sheer hard work & dedication’: GCSE results day 2021 at Atlantic Academy

GCSE results day at Atlantic Academy was an occasion for pride and celebration. Following another extraordinary year where Year 11 students did not sit formal…